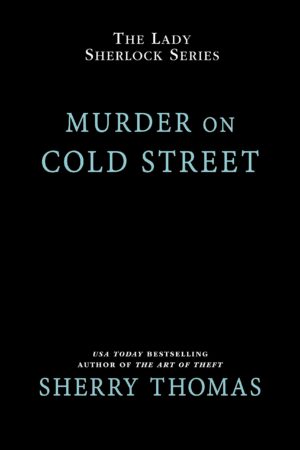 November 22, 2019 » Crime Reads names the Lady Sherlock books as a notable series of the decade.

November 8, 2019 » Sherry’s Q&A with Smart Bitch Sarah at the Loyalty Bookstore in DC is now a podcast for your commute or housework!

October 20, 2019 » Sherry writes about how she doesn’t read crime fiction just for the crimes at Criminal Element.

October 18, 2019 » Sherry talks about life, writing and THE ART OF THEFT with Hasty Book List and Jean Book Nerd.

October 7, 2019 » BookBub leads with the Lady Sherlock books in its roundup of the 12 Most Creative Sherlock Holmes Reimaginings.

October 1, 2019 » Bookish, Crime Reads, and BookRiot all name THE ART OF THEFT as one of their most anticipated mysteries of Fall 2019.

September 18, 2019 » THE ART OF THEFT has been voted a LibraryReads pick for October 2019. LibraryReads is a recommendation program that highlights public librarians’ favorite new books. This grassroots virtual community, open to all public library staff, serves as a national “library staff picks list,” featuring the Top Ten adult titles published each month that library staff have read, loved, and cannot wait to share with their patrons. (This is especially thrilling as Sherry loves libraries—she grew up in them, practically—and is still in and out of her neighborhood branch library all the time.)

August 16, 2019 » BookRiot celebrates The Lady Sherlock books by naming them as a favorite mystery series, a mystery series that keeps the twists coming, some of the most popular under-the-radar library books, and comparing them to the delights of an afternoon tea. Hmm, scones and clotted cream. Charlotte Holmes, Lady Sherlock, is also ranked as one of the best ficional female crime fighters.

July 2, 2019 » The Lady Sherlock books get recommended by The Ripped Bodice to BookRiot.

June 11, 2019 » The Lady Sherlock books are mentioned in the Strait Times. Sure, it is only as a coda to a review of a different book, but all the way over in Singapore!

June 4, 2019 » THE HOLLOW OF FEAR has been named one of the best books to read this summer on NBC TODAY.

May 24, 2019 » The Lady Sherlock books have been featured in a WashingtonPost.com story.

January 21, 2019 » THE HOLLOW OF FEAR has been nominated for a Barry Award in the Best Paperback Original category. Guess Sherry will be attending Boucheron, where the winners are to be announced. 🙂

Praise for A Study in Scarlet Women

“Sherry Thomas has done the impossible and crafted a fresh, exciting new version of Sherlock Holmes. From the carefully plotted twists to the elegant turns of phrase, A Study in Scarlet Women is a splendid addition to Holmes’s world. This book is everything I hoped it would be, and the next adventure cannot come too soon!” —Deanna Raybourn, New York Times bestselling author

“Clever and absorbing. Thomas’s gorgeous prose and expert characterizations shine in this new incarnation of Sherlock Holmes. Readers will wait with baited breath to discover how Thomas will skillfully weave in each aspect of the Sherlockian canon, and devour the pages to learn how the mystery unfolds.” —Anna Lee Huber, National Bestselling Author of the Lady Darby Mysteries

“Gender bending is just the first sign that unusual happenings are afoot in this origin story for a revamped Sherlock Holmes series by bestselling author Thomas…There is also a tantalizing, slow-burn love story between Holmes and a longtime friend befitting Thomas’ skills as a romance novelist….The ground has been laid well for future incidents in the professional and intimate life of Charlotte Holmes.” —Kirkus

“Author Sherry Thomas didn’t just insert Charlotte into Sherlock’s area of expertise, she made a character completely different from the well-known man. Cute and blonde, Charlotte doesn’t have Sherlock’s scorn for everyone. And because she is a lady in Victorian England, Charlotte has to be creative in her investigation in order to preserve the illusion of Sherlock Holmes to the man on the street and the police. The various characters introduced are quite interesting and the plotlines are great. This is the first in the new Lady Sherlock series, and if this is any clue, Charlotte and her continuing adventures will be thrilling to read.” —Suspense Magazine